The Dick Allen Cup and The Allen Cup

19/01/2014
Dick Allen was born in 1915 and in the 1950s came to Fordingbridge with his family (wife Peggy and children Jane and Mark) to go into Veterinary Practice with Dick Orton – a partnership known as Orton and Allen, in Park Road, which lasted until their retirement and the sale of the Practice (now called Forest Veterinary Practice).

Dick died in 2002 at the age of 87 but his wife Peggy who will be 92 in 2014 lives in Devizes near daughter Jane. Peggy was a renowned expert on dolls and dolls houses, who gave talks on this subject. A beautiful doll’s house and contents, which belonged to Peggy, can be seen in Fordingbridge Museum.

Jane has confirmed that Dick favoured photography with slides and in particular putting together slide sequences with appropriate background music. Not only did he enjoy the photography element but he relished researching each subject. In Jane’s words “the end results gave much pleasure to his audiences, both in the club and at home.”

When Dick retired he became a keen follower of the sporting activities of his two grandsons, James and Nick, who played cricket and rugby at Sandle Manor School (now Forres Sandle Manor) and Sherborne School and was regularly seen with his camera on the touchline taking photos of their efforts. As a result he became an expert on the quality of school teas all over the southwest!

This enthusiasm has left Jane and her family with a photographic record of Dick’s grandsons’ sporting accomplishments in school teams at all levels and in all weathers.

The image below is produced by kind permission of Jane Scorer, Dick and Peggy Allen’s daughter, and shows Dick, with camera, on the touchline of one of the above mentioned sporting events. 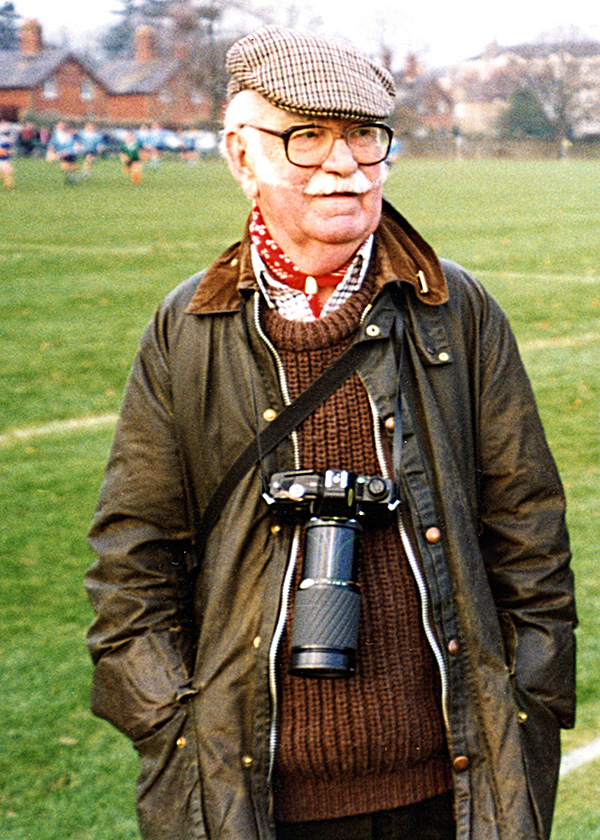